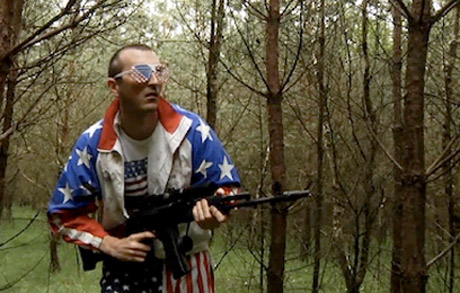 In 2010, composer Dan Deacon and filmmaker Jimmy Joe Roche of the Wham City art collective were invited to a three-week residency in Hilvarenbeek, Netherlands as part of Incubate, a multidisciplinary international arts festival. Dan and Jimmy used those three weeks to shoot a short film. Working loosely from a collaborative script, they filmed local residents as actors & singers, with little rehearsal and shooting very few takes. Several additional scenes were appended last-minute, inspired by the locations and props available.

“Hilvarenbeek” interweaves the Baltimore DIY aesthetic, popular Americana, the rich beauty of the Netherlands, and Dutch cutlure into a surreal narrative. The result is a melting pot of experimental performance & sound, pop fantasy, and social commentary. “Hilvarenbeek” debuted at the Maryland Film Festival on May 8, 2011.

DAN DEACON has garnered a reputation in the underground as an intense performer and classic showman. He is also a classically trained composer with a Masters degree in electro-acoustic composition. His most recent album, the dense, sprawling Bromst made it on many music critics’ “Best of 2009” lists. Deacon splits his live performances between electronics-heavy solo engagements and 17-piece live band shows.

JIMMY JOE ROCHEs videos have screened internationally in venues including the Royal Academy of Arts in London, Boston Institute of Contemporary Art, J. Paul Getty Museum and Incubate Arts Festival in the Netherlands. In 2008 Roche had his first solo show at Rare Gallery in New York, 2010 marked his second solo show in Colorado at the Rocky Mountain College of Art and Design, and his third solo show opened at Rare Gallery in January of 2011. His work has appeared in numerous publications including The New Museum’s “Younger Than Jesus” Artist Directory.