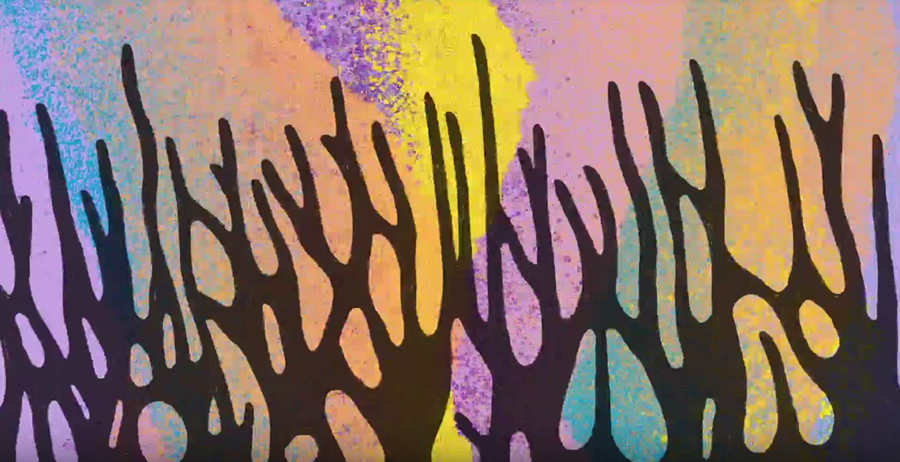 From John Mark Lapham of MIEN:
“I’ve admired Mike Turzanski’s artwork since around 2011 when he did some work for a project I was working on at the time called The Revival Hour. Mike is a Rochester, NY based artist and musician that creates these surreal and oftentimes nightmarish worlds through his art. (I’ve been looking for ways to work with him again ever since he had me and a friend of mine dunked in a cold lake in Rochester spitting pink goo out of our mouths for a photography project… don’t ask…) When it came time to find an artist to create a video for Earth Moon, he was the first person I thought of. I knew he had done a lot painting and sketches, but wasn’t sure he ever tackled a completely animated video production. When I asked him if he’d be interested, he jumped on it and within a few weeks we got a fully formed hand painted video! Mike’s an amazing artist and we’re honored to have his hands all over MIEN. I’m looking forward to our next collaboration (though hopefully not in a freezing lake this time…)”

From Mike Turzanski (Director):
“The vision for Earth Moon’s video was first presented to me with the visual inspiration of early 70s animations. These vintage videos have the distinct look and feel of something completely hand made. Looping psychadelic visuals in a very raw form felt like the best approach. Each frame was hand drawn and scanned in to produce the analog and physical look. Taking this older cel animation frame by frame technique was very consuming but well worth the result.  Earth Moon is a song that makes you feel like your body is a rippling wave in space. I wanted to create a video that would only add to this feeling.”

The press reactions to the band so far have been overwhelming:

“MIEN is the psychedelic line up of your dreams” -Clash

“Will put you in a mesmerized stupor” -The Revue

“Is it too early to say I’ve already heard one of the best singles of the year?” -7th Level Music

“Capture the sonic altered state of consciousness” -Turn-up the volume

“The Crosby, Stills, Nash and Young for the 21st century” -Audio Fuzz

“Shot through with a sinister, intoxicating venom” -Get Into This