Legendary indie label approaches its 30th year of operation with a subscription
series featuring exclusive 7” singles from Wildhoney, Pale Lights, Dolly Dream and more. Listen to the first entries from Rat Columns and The Suncharms
on Soundcloud: https://bit.ly/2JExNi8 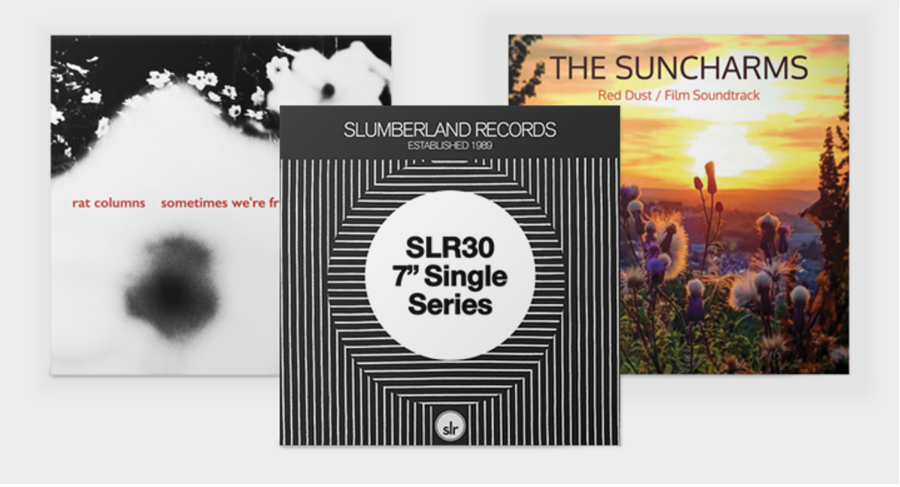 Founded in the Washington, DC area in 1989, Slumberland Records began as a 7” label and
was always inspired by the ephemeral and often electric pleasures to be had from the perfect single. Over the last 29 years Slumberland has released 126 7”s, and even though downloads, streaming and playlists have stolen some of the “you heard it here first” thunder from the vinyl single, there’s still something pretty magical about the not-so-humble 7”.

To help kick off the celebration of their 30th birthday and help people reconnect with their favorite vinyl format, Slumberland are launching their SLR30 Singles Subscription Series (sign up for it here). Featuring 12 singles to be released over the next eighteen months, the series is slated to conclude with a final entry right around Slumberland’s 30th birthday in December 2019.

The plan is to release a pair of singles every three months by bands and artists not generally associated with Slumberland; all of the singles will be produced in one pressing only, in quantities that might be best described as “very limited.” While the singles will also be available in all fine record shops, subscribers will get exclusive color vinyl pressings, fun goodies throughout the series, and finally a bonus single at the conclusion of the subscription that won’t be distributed to stores.

While the final list of bands is still being completed, the first two singles are in production and slated to ship in late July. Featured in this first pair are Australian pop geniuses Rat Columns and Sheffield’s 90s indie legends The Suncharms. Rat Columns feature members of Total Control and Lace Wings in their ranks, and the three songs on their SLR single are pop gems very much in the lineage of Australian pop from The Go-Betweens to more recently Terry and Dick Diver. The Suncharms single is an especially appropriate entry in the series, as the band was slated to release a single on Slumberland back in the mid 90s only to be derailed by the untimely demise of the group. Now they are back, and the two psychedelic, shoegazey tunes on this 7” are a welcome return for the band.