Shot on 8mm film in Cape Cod, “Lost Island” is like watching a faded summer memory 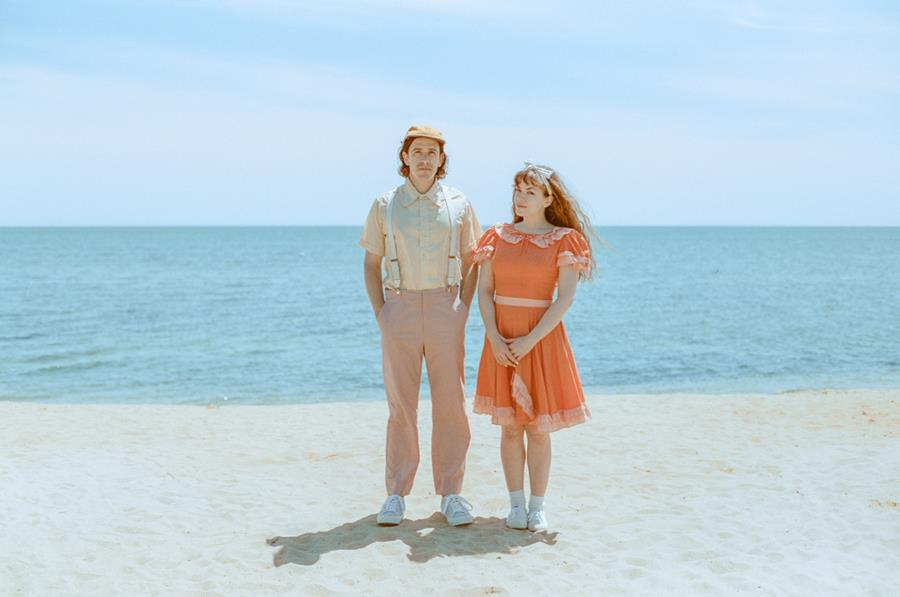 VIDEO
Shot on 8mm film in Cape Cod, MA, the video for Holy Golden’s “Lost Island” is like watching a faded summer memory. The main location for the shoot was a group of red cottages called ‘Pleasant Forest Shores’,  built by hand in 1949 by a family of Swedish Immigrants, the family’s only son (see very end of video) still upkeeps the cottages today for summer visitors, but not much, including the wallpaper, has changed since the 50’s, making it the perfect time capsule to evoke a forgotten era.
Leslie grew up visiting her grandparents each summer in the same small town and the video plays with the songs theme of having to grow up, learning to deal with things on your own, and the longing daydreams that never leave us.

Knowing they wanted a nostalgic feeling shot on film, Leslie and Andrew spotted Madelynn De La Rosa’s work on youtube and reached out to see if she wanted to fly from LA to Cape Cod to help bring their vision to life. They also brought in Ashley Kickliter, a photographer from Birmingham, AL who they had connected with on Instagram after she said “Whatever weird wavelength these people are on, I want to be on it.”

The video is proof that sometimes through the swamp of social media, we find diamonds in the rough and make the same lasting connections that aren’t a result of anything besides being a human and connecting with one another.

SONG
The first track to release from Holy Golden’s next musical adventure, ‘Sleepwalkers In The Milky Way.’ “Lost Island” is a summer anthem written in the deep of winter. The song displays the bands love of genre blending, with its twangy vocal style and dreamy guitar riffs that create a bittersweet sound. After writing and recording the majority of the music on their 8-track in Cape Cod, they finished recording the vocals and did the mixing at Machine With Magnets in Providence, RI (Battles, Deertick) and then mastered by Greg Calbi of Sterling Sound (Kacey Musgraves, The War on Drugs, Tame Impala)

Despite how personal the lyrics are to Leslie’s own life, it comes off as deeply relevant. Leslie kicks off the song by singing “All the men that held me and said, you could be a good girl if you just go to bed.” A relatable feeling, especially for women in the music and film industry. The repeated line, “Who cares anymore” is not to say that no one does, but a call to those who do.

About Holy Golden
Holy Golden is the multifaceted musical world of Leslie Schott and Andrew Valenti. The two met serendipitously during a lunar eclipse on the island of Martha’s Vineyard when Leslie walked into the record store where Andrew was working.  They soon began crafting mythological mini-worlds into music, music videos, short films, and photo stories. Their sound blends euphoric dream-pop with twangy lo-fi garage rock to create a style that evokes Dolly Parton backed by The xx.

Their first album ‘Wax Castle’ was released to critical acclaim and put out by Wallflower Records in 2017. Their following EP, ‘The Licking River’ was mixed and produced at Machines With Magnets (Battles, Deertick) and named by a number of music blogs as one of the top indie EPs of 2017.  Their latest release, ‘Otherworld’, a concept album was produced by Steve Rizzo (Belly, Kristen Hirsch) and released February 2018. Within their first year of performing live, they have traveled throughout the US on two national tours along with several live performances throughout the East Coast.

They will be based in Brooklyn this summer playing shows in the city and releasing new music and videos from their upcoming EP, recorded this past winter at Machines With Magnets and mastered by Greg Calbi of Sterling Sound (Kacey Musgraves, The War on Drugs, Tame Impala.) They will be touring in Fall 2018 alongside the EP release.