Listen to it & wallow in despair here 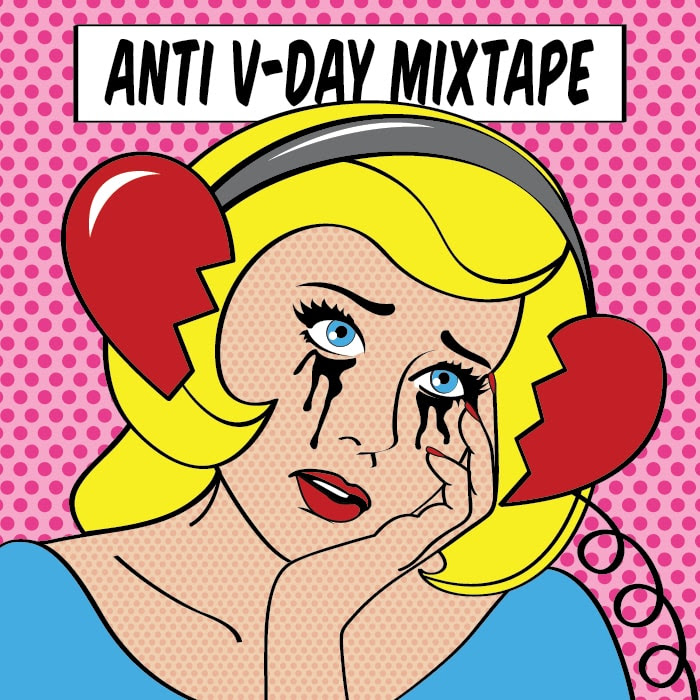 Let’s face it, Valentine’s Day is the worst holiday of the year! We launched this series back in 2015 as a way of getting through that awful day, Feb. 14. Since then, Spotify launched their own official version of the Anti V-Day playlist (we are still waiting for our royalty check or at least a shout out!) and I just saw that there’s now a party in New York called It’s Friday, I’m (Not) In Love: An Anti-Valentine’s Day Party. So, get ready to wallow in despair, or throw your own Anti V-Day party and let us provide the soundtrack with our longest playlist yet. Also congrats to The Magnetic Fields who have now made more appearances in this series than any other artist!

“A nice ode to the bickering that destroys us.”

2. The Breeders – “So Sad About Us”
Selected by Daniel Gill of Force Field PR

“I think it is about a fool who dumped her. She was a real true ass fader.”

4. Gloria Ann Taylor – “How Can You Say It”
Selected by Nate Brenner (Naytronix / Tune-Yards)

5. Gabriella Cohen – “I Feel So Lonely”
Selected by NovaBound

6. The Magnetic Fields – “If You Don’t Cry”
Selected by Living Hour

“Somehow this song manages to be nostalgic, regretful, sweet & bitter all at the same time. I love how it starts simply as a duet with voice and chorus-y guitar, only to unfold later into a rich expanse. Can’t get enough of it.”

10. Silver Jews – “How To Rent A Room”
Selected by Electric Arch

“One of the great early Silver Jews songs. It starts with “No I don’t really want to die, I only want to die in your eyes” and later has some of my favorite lyrics of all time: “Now there’s a lot of things that I’m gonna miss, like thunder down country and the way water drips, when you’re running for the door in the rain”

12. The Modern Lovers – “Hospital”
Selected by The Gloomies

14. The Microphones – “I Felt Your Shape”
Selected by Living Hour

15. The Cure – “In Between Days”
Selected by Daniel Gill of Force Field PR

16. The Cranberries – “Not Sorry”
Selected by Giant Killer Bats

“I chose this one because i love how blatantly honest she’s being about her sadness.

“I’m sad, not sorry ’bout the way that things went
And you’ll be happy and I’ll be forsakin’ thee.”

“A desolate ballad for a lonely city, where the only things that matter are love and money. Money comes first though.”

19. The Only Ones – “Out There In The Night”
Selected by Marion Belle (Fatal Jamz)

“…you left that morning, you gave me no warning, you were my best friend”

21. Jorge Elbrecht – “Only Gonna Break Your Heart”
Selected by No Joy

22. King Krule – “Out Getting Ribs”
Selected by The Gloomies

“A cosmically depressing song about romantic loss and loss in general–ironically offset by kind of a light, jaunty groove. But maybe the song is reminding people to stay strong in a “you’re born alone and you die alone” kind of way. Definitely not a party song.”

“To me this song captures the beautiful aspect of loneliness & in a strange way makes it something worth looking forward to.”

“It encapsulates perfectly the wistful longing and actual process of going through a break up.  I heard it for the very first time while I was in the midst of one and it was both crushing and comforting.”

“At one point I think Milla Jovovich was my husband’s “only lady I would maybe have one night with if I met her”…what’s the term for that again? I can’t remember. I can remember, however, how into this song I was though when I was fourteen and was broken up by with by a short boy named Andy (which is also my husband’s name…)”

“This tune reminds me of the type of breakup where you just long for what you once had. There’s no bitterness or resentment. You’re just left trying to make sense of what the hell went wrong.”

29. The Byrds – “I’ll Feel A Whole Lot Better”
Selected by Kip Berman (The Natvral / The Pains of Being Pure at Heart)

“I recently saw the Conny Plank documentary his son Stephan released in 2017.  You see where so much timeless music was made and learn how the last 1/4 of the 20th century would have sounded different without Conny.

I didn’t know about him recording Ultravox. The movie explains how “Vienna” was what it is because of him. Midge Ure said Conny told him to sing ‘it means nothing to me’ because that is what Midge said that when he heard the bombastic classical stuff band member Billy Currie had written.

I love that a song’s chorus, that wasn’t pulled from any kind of love story, meant so much to so many people who thought it came from love.”

31. The Field Mice – “I Can See Myself Alone Forever”
Selected by Juan Izguerra of Force Field PR

32. The Pipettes – “Your Kisses Are Wasted on Me”
Selected by thurlowood

39. The For Carnation – “Moonbeams”
Selected by Andrew Rinehart