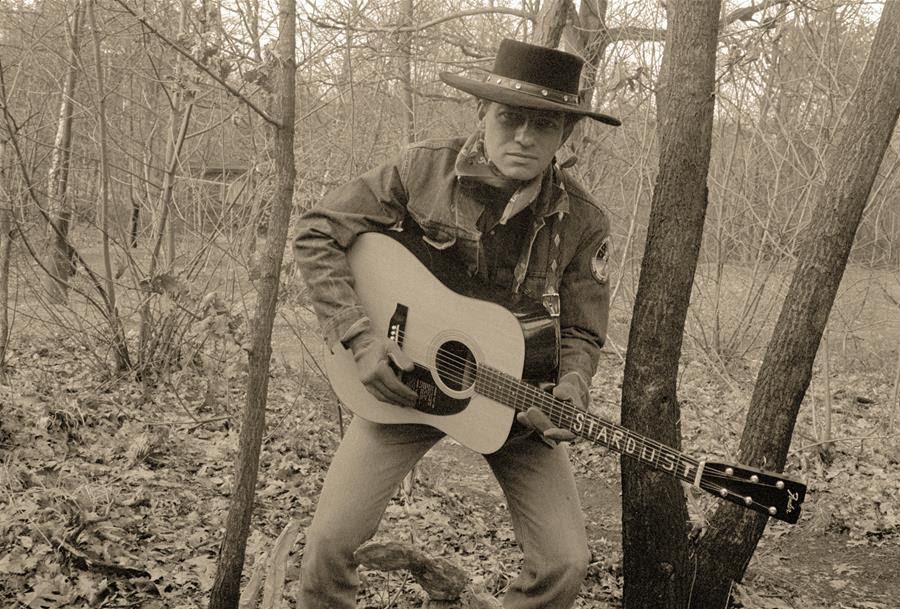 Feuerzeig and Rosenthal revealed the news of their new documentary via an exclusive interview with Rolling Stone (read the full interview here). They spoke with RS about how The Legendary Stardust Cowboy (real name: Norman Odam) inspired David Bowie to create the Ziggy Stardust character:

Odam was all but oblivious to his impact on Bowie and the history of glam rock. “David Bowie and the Ledge were Mercury Records labelmates in 1972 when Bowie created his Ziggy Stardust persona,” Feuerzeig says. “The thematic link was Bowie’s fascination with space travel, already transposed onto his hit song ‘Space Oddity,’ and with the Ledge’s song, ‘I Took a Trip on a Gemini Spaceship,” which captivated Bowie, who would cover it 30 years later on his Heathen album. But it wasn’t until 1985 that Norman learned that he, in fact, inspired Bowie.”

The filmmakers hope that the Legendary Stardust Cowboy’s unusual story and wild music will fascinate the same people who latched onto Daniel Johnston’s story. “Norman and Daniel Johnston are both singular artists,” Feuerzeig says. “What they both have and had going for them is that they lived lives and went on journeys that most mere mortals can never imagine. Actual sagas with uncommon twists and turns and poignant emotional blows that a Hollywood narrative film could never have scripted. Daniel ran away from home on a moped and joined a carnival. Norman hopped freight trains and rode the rails as a hobo looking to recapture his fame. These guys are movies.”

SYNOPSIS:
One man’s quest for fame leads him on a quixotic journey through his childhood obsessions: the 1960’s NASA space program, Hollywood’s singing cowboys, and the big Texas sky. Along the way, he records the most significant novelty record of all time, alters rock ‘n roll history, and touches the stars.

ABOUT JEFF FEUERZEIG:
Award-winning director, writer, and producer whose feature film The Devil and Daniel Johnstonwon top documentary directing honors at the 2005 Sundance Film Festival and was distributed theatrically by Sony Pictures Classics. His other directing credits include AUTHOR: The JT LeRoy Story for Amazon Films, VICE, Ratpac and A&E Films, and The Real Rocky for ESPN’s acclaimed “30 for 30” series. As a writer, his work includes Chuck aka The Bleeder (co-written with Jerry Stahl) starring Liev Schreiber and Naomi Watts as well as the animated Johnny Paycheck pilot episode and two George Jones & Tammy Wynette episodes of Mike Judge Presents: Tales from the Tour Bus for Cinemax.

INDIEWIRE recently voted The Devil and Daniel Johnston “The Best Music Documentary of the 21st century.”

AUTHOR: The JT LeRoy Story was nominated in 2017 by the Writers Guild of America for Best Nonfiction Screenplay.

ABOUT HENRY ROSENTHAL:
Recently declared by KQED “the Bay Area’s preeminent independent film producer.” He has produced dozens of award-winning features, documentaries and shorts. He has lectured extensively at most Bay Area colleges and universities including University of San Francisco and University of California at Berkeley. The Legendary Stardust Cowboy reunites him with Jeff Feuerzeig after their successful collaborations on The Devil and Daniel Johnston (2005) and AUTHOR: The JT LeRoy Story (2016).

From 1994 to 2005, he served on the board of directors (the last two as Chair) of the Film Arts Foundation. He is also an Advisory Board member of the San Francisco Cinematheque and San Francisco Indiefest.

Rosenthal works from behind a desk that once belonged to James Brown, and enjoys the world’s largest collection of two-headed calves.