Three days before the release of his album Pink Dogs on the Green Grass via Blow The
Fuse, Paul Jacobs (also the drummer in Pottery) releases new single “Christopher Robbins,”
the opening track off his upcoming effort due out April 30th. The Montreal-based indie
musician and visual artist seizes the opportunity to unveil a new self-directed video. This
time, he’s moved away from animation in order to use footage captured – by Meagan Callen,
who also plays in his band – with both digital and analog cameras. Echoing Paul Jacobs’
multifaceted nature, the video shows him multiplying and playing all the instruments present on the song, as he did when recording Pink Dogs on the Green Grass in his Rosemont apartment.
Contrary to what its title might suggest, “Christopher Robbins” isn’t a spin on the similarly named Winnie the Pooh character.
“This song’s about working for the man and doing what you gotta do to pay the bills until you find out what’s next,” explains Jacobs.
Born from an off-kilter bongo beat and enhanced with a lo-fi sounding keyboard, it lays the foundation for the other 12 tracks of the album. To celebrate the release of Pink Dogs on the Green Grass, a virtual launch show will take place on May 7th at 8pm EST.

Watch and share the music video for “Christopher Robbins” via YouTube.
Pink Dogs on the Green Grass is available for pre-order now.

This new music video follows the releases of “Half Rich Loner,” “Underneath the Roses” and
“Day to Day,” all three of which have caught the attention of international media outlets such as Stereogum, DIY Mag, Brooklyn Vegan and NME, in addition to landing some airplay on BBC Radio 6. You can watch them all now on Paul’s YouTube channel.
Pink Dogs on the Green Grass is a deeply personal record on which Paul Jacobs opens
up about his experience in life through the lens of folk, pop, rock and psychedelic music.
This is the essence of his album, a 13-track collection of ageless, yet modern recordings
inspired by classic acts past and present. From deep emotional melodies to freak out jams,
folk-pop ballads to synth rock ‘n’ roll epics, Jacobs truly creates a world of his own.
By combining his passions for music and visual art, and creating all the artwork associated
with the project – from the album cover to the design of the merch items, Paul Jacobs
perfectly embodies the modern version of the Renaissance man, who pushes back the
boundaries thanks to his unique work. In his artistic universe, these two areas of creation are so intertwined that it was the cover art that inspired the title of the album and not the other way around.
“I was trying to come up with an idea for the cover to possibly help me with a title. I drew these dogs and thought it was pretty cool so I added the color. I still couldn’t come up with a name for the album so I decided to title the album art instead of the album,” he explains. “I felt like it had the feel of a children’s book, something that you would come across in your adult years that would bring you back to childhood for a moment.” 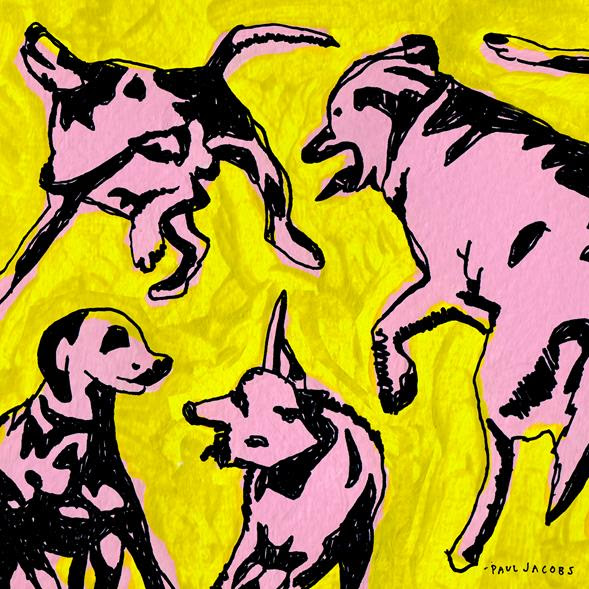