By Force FieldJanuary 11, 2022No Comments 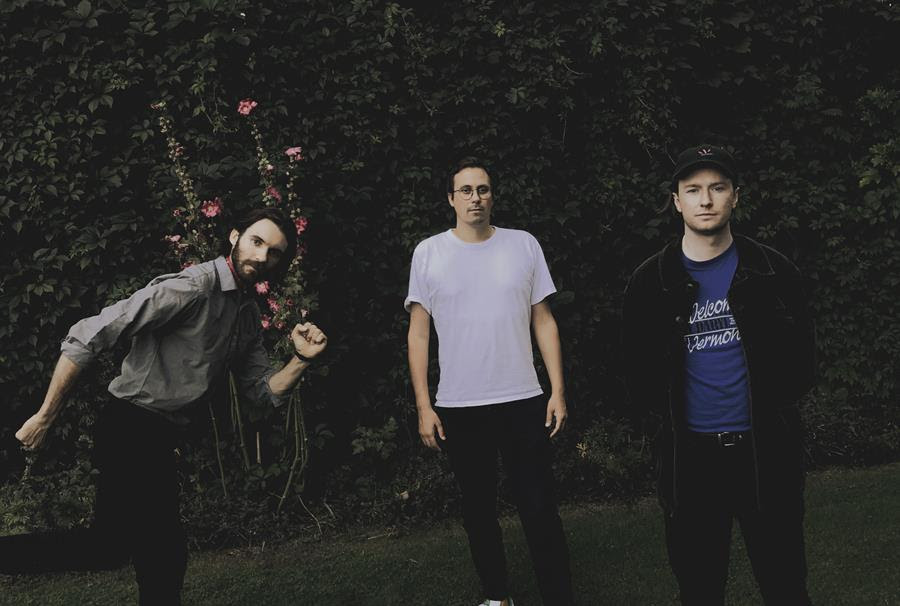 Since their debut on the music scene in 2009, one thing that everybody has been able to agree on about Ireland’s No Monster Club is… well… nothing, really.
Their music has been variously referred to as “garage rock” (Austin Town Hall), “no bullshit pop” (Tiny Mix Tapes), “jangle-thrash” (My Old Kentucky Blog), “lo-fi tropical surf-pop” (Nialler9), “bedroom indie” (Impose Magazine), “sugary art-pop” (Gimme Tinnitus), “new wave-y indie rock” (Brooklyn Vegan), “like a stripped-down, sugar high Pet Sounds” (NYLON Magazine) and “a bit like Girl Talk” (Vice Magazine). When their 2011 Young Guts Champion EP ended up on the soundtrack of a number of Australian surf films, they even found themselves the toast of beach bums across the world.

What began as the solo project of Bobby Aherne – and continued as such for half of their twelve out-of-print releases prior to deadbeat effervescent – No Monster Club has featured a revolving cohort of collaborators, including Paddy Hanna, Mark Chester (Ginnels) and M.SORD (Jon Spencer and the HITmakers). In 2019, Aherne decided to adopt the name Sir Bobby Jukebox to start differentiating his solo material from the strictly collaborative future output of No Monster Club. Now settled as a trio, deadbeat effervescent is the first No Monster Club band album since 2013’s Foie Gras – and their first release since 2016’s Where Did You Get That Milkshake? 7” EP (hailed by legendary Nirvana biographer Everett True as “pure and wonderful”).

In their homeland, they’ve been lauded as “a leading light in domestic DIY music for nigh on a decade” (Totally Dublin) and for exhibiting “the kind of tunefulness that makes a joke of so much contemporary pop music” (The Irish Times). Stateside, they’ve cut their teeth on two separate tours of basements and dive bars from Milwaukee to NYC – as well as appearing on the likes of ‘The BJ Rubin Show’ (MNN), ‘Chic-a-Go-Go’ (CAN-TV), ‘Phoning It In’ (KDVS) and ‘Prove It All Night! with Pat Byrne’ (WFMU). Their cult status was recently cemented with fond mentions in books by acclaimed humorists John Hodgman and James Acaster.

Until now, No Monster Club may have existed as the shape-shifting musical equivalent of a Rorschach test – but with the kaleidoscopic hi-fi gusto of deadbeat effervescent, they’ve finally delivered an accessible, cohesive and unifying statement of intent that is the culmination of twelve years’ work. Comfortably sitting in the cross-section of the Venn diagram containing Bubblegum Pop, New Wave and Elephant 6-style Indie Rock, this record – a joint release between Ireland’s Popical Island and Arizona’s Emotional Response Records – is filled with a delightful, uplifting peppiness that couldn’t have arrived at a more appropriate, badly needed moment in time.

Aherne dreamt up the guts of this album while living in Brisbane, Australia – a subtropical coastal city where love, sunshine, a fresh music scene and a change of pace all combined to give him a new lease of life. In February 2020, upon his return to Ireland, Aherne and Tim Falcon Prime (drums/percussion/backing vocals) decamped to Casa Mona in the stormy seaside village of Ballybunion to write and track the rhythm section of this album. As they sat in a pub overlooking the Atlantic Ocean, toasting the completion of the drum and bass parts, news broke about Ireland’s first covid case – a development that would substantially delay the completion of this record. In between lockdowns, jangle-pop virtuoso Mark Chester laid down the guitar tracks to complete the trifecta.

According to Aherne, that’s where they’d intended to stop: “Originally, we had the specific intention of making an album that we could easily replicate live as a three-piece band. I tend to go a bit OTT with overdubs, as I have too many musical toys at my disposal… something that we wanted to avoid this time. No bells or whistles – that was the rule. But thanks to Covid, I was given far too much time to tinker with it. And as the pandemic stretched on, and the idea of playing live became more and more of a foreign concept, I scrapped our original plan and proceeded to decorate it with a number of bells – as well as at least one actual whistle.”

This unexpected gestation period also led to star turns from Australian brass player Kelly O’Donohue, Russian violinist Peter Voronov, and Barbadian steel-pannist Cherise Thorne. The album was then mixed by Daniel Fox, before being mastered by Richard Dowling. Per Aherne: “As well as being a brilliant producer, Dan is a member of the amazing, earth-shaking Gilla Band… and Richard has mastered the likes of S Club 7 and Kylie Minogue. So they seemed like the ideal yin/yang combo to get to put their stamp on these songs.”

As a result, deadbeat effervescent is the sound of a traditionally self-produced, one-man bedroom pop project finally emerging from its chambers to realise its full vision in spectacular style – a concept alluded to on the album’s artwork, by Brazilian illustrator Raysa Fontana. On this LP, the technicolor pop melodics of No Monster Club have finally been treated to the shimmering hi-fi production that they’ve spent over a decade calling out for – putting the listener in a better position to observe the band’s dab hand at persistent earworms, unusual arrangements, sonic adventurism, and cryptic singalongs.

The glam-pop stomp of the album’s opening track, ‘Waterfight!’ lays the groundwork for deadbeat effervescent – a playful call to arms, drenched in nostalgia and framed by a bittersweet, ever-fading connection to one’s younger self. On the album’s first single ‘Save the Circus’, Aherne uses the Circus as a metaphor to lament noteworthy places being left to rot and crumble – a timely nod to his home city’s ongoing housing and infrastructural crisis. Meanwhile, the band’s inclination toward crate-digging bubblegum pop is at its most overt on ‘A Bugle Call’, which concerns a point of reckoning – the moment at which grievous news causes the previously straightforward path of life to fork in two.

Later on the album, the sardonic chorus of ‘Case by Case Basis’ (“We’re going places on a case by case basis/Assess me on a case by case basis”) was inspired by the singer’s transglobal relationship and hellish experiences with visa applications and bureaucratic red tape. Elsewhere, ‘MacGyver’ is a heartfelt love song to his former Brisbane neighbour – a Russian Blue kitten named after Patty and Selma Bouvier’s favourite war hero.

“In Brisbane city,” explains Aherne, “there’s this incredibly content busker who stands in front of the casino playing his steel pan for like ten hours a day. So the din of tropical pans floating through the air is just what Brisbane sounds like to me. So now the steel pan on that song takes me right back to a specific time and place! It’s nice. And MacGyver, if you’re reading this… I hope you’re doing good.”

In 2018, Aherne composed the stage musical Trial of the Centurys – a pursuit which may have informed some of the slightly more theatrical songwriting on display here (see ‘Ticker Tape Parade’ and ‘The Trundling Path’).

At times on this LP, No Monster Club come across like the improbable missing link between ABBA and Daniel Johnston – but deadbeat effervescent also contains whispers of Sparks, New Musik, Devo, Pavement, Electric Light Orchestra, Orange Juice, Talking Heads, and even – in its more bombastic moments – the band’s occasional tour-mates The Polyphonic Spree. Coming from a devil-may-care act whose fifth album was a 46-track cassette of haphazard lo-fi demos, deadbeat effervescent is a patiently produced, surprisingly lucid, meticulously crafted, joyous slice of bizarro Art Pop – which might be something that everybody can finally agree on. 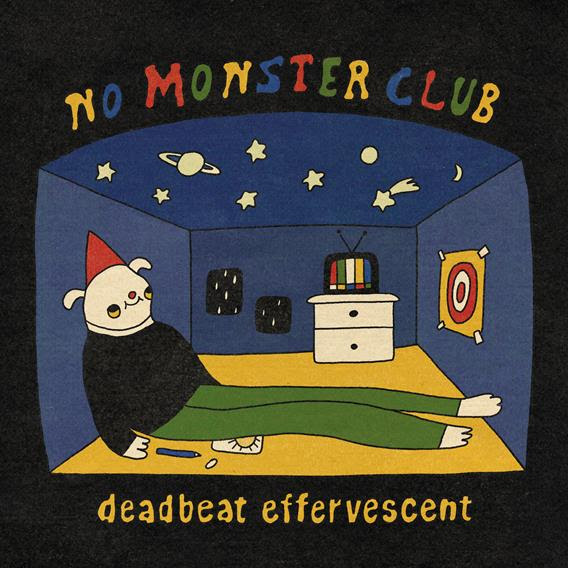