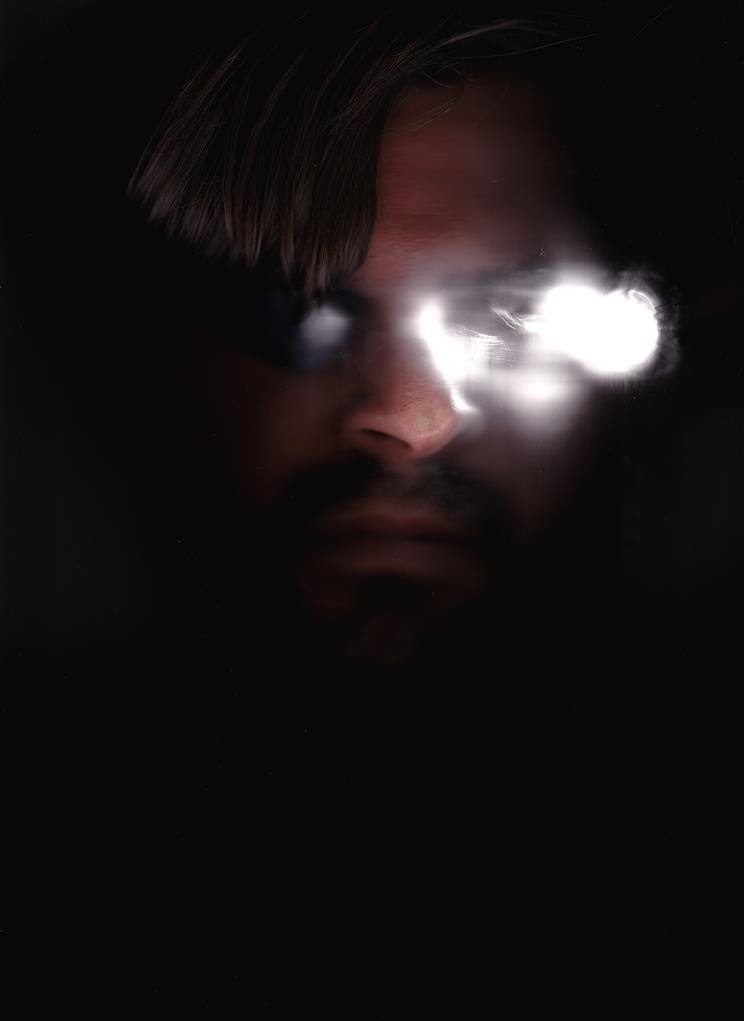 “A lullaby for those who can’t sleep. Bewitching melodies telling you disenchanting things.  A futile attempt to destroy a past that has already withered.” -Andrew Becker on “Book of Jaws”

***
Hoosi, No! is the fifth release by Human Potential, the solo designation of Andrew Becker – an award-winning filmmaker and former drummer for Dischord Records band, Medications and Brooklyn baubles, Screens.

After his previous release, I’m Glad You’re Alive, went silver in Melanesia, Becker spent several years recklessly celebrating the album’s unlikely success, indulging in a daily regimen of heavy Myristicin ingestion leaving him with an unshakable predilection for listening only to Jay and the Americans’ Belgian imports, Voice Farm vocal outtakes and Nexda’s “657.”

But, in the summer of 2020 a Lithuanian stenographer named Steakman sent Becker an unearthed demo of the heretofore thought apocryphal Sherman Helmsley / Gong collaboration. The sounds were alarmingly profound, providing a deep sonic exfoliation that sloughed off the miasmic effervescence of seismic hygienic and creative dereliction. AB’s musically stagnant world was suddenly shepherded off of its axis.

Inspired, Becker sold his belongings and set out from his Los Angeles rondavel, armed with only a hagfish bindle and his former babysitter’s Bolang Gu, in search a new and completely unique sonic paradigm. For several months, he rode the rails in search of the euphonic promontory that he was convinced awaited him somewhere amid America’s alternately soggy / burning landscape.

But, it wasn’t long before Becker found himself unexpectedly restrained to a cot, after waking up at an Aghori urgent care clinic in Sussex County, Delaware. Attendants informed Becker that he had been gravely injured in a knife fight after attempting to burgle the only known copy of Robert Goulet’s notorious Bathory covers album from a fellow transient. The lacerations to his face and nasal passages made emergency surgery imperative, resulting in the removal of his Jacobson’s organ – a peripheral sensory organ of the accessory olfactory system.

Having previously relied on this largely unknown physiological instrument to decode and interpolate rhythm, frequency and timbre (a rare form of synesthesia) Becker immediately saw his musical aspirations dashed.

Dejected and insolvent, Becker borrowed a lime green tank top from a Milford mystic and rode a shetland pony back to Los Angeles. At home, he set up a store on the Silk Road to sell his one last possession of value – a platinum-plated lock of hair extracted from the stand-in orangutan from silver screen sparkler, Dunston Checks In. With the handsome proceeds, Becker purchased a collection of laser discs from the estate of Jan-Michael Vincent and devised a plan to invert his routine musical sources and methods. Relying strictly on his visual sense, he clicked off the volume and set about rewriting the scores to the bounty of cinematic gems found in Vincent’s trove.

The title sequence to Sam Peckinpah’s epic The Wild Bunch became the backdrop for opener, “Hoosi, No!,” a slovenly marriage of stately beauty and insidious violence. The eerie excavations of Harvard Sensory Ethnography Lab masterpiece, “Leviathan,” spurred the lurching, unnerving, “Zwunck,” while a collection of Central American Manakin mating ritual clips prodded on the sturdy, sumptuous ravings of “80 All Over.” Before long, Becker had drawn inspiration from the repetitive disorientation of Stan Brakhage’s Dog Star Man (“Some Small Anti-Christ At The Art Show”) and Hollis Frampton’s ruin of memory on Nostalgia (“Love Song For H.R. To Sing”), to the sultry light abstractions of John Cage’s “One11” (“Dye-Night Escapes”). “Queasy Bricks and Starving Cars: The Spectacular Collapse of the Wing Street Bridge” is the score to a film yet to be made, though it would be disingenuous to say it was not at all inspired by footage of the Tacoma Narrows Bridge collapse of 1940.

Eventually, Becker compiled this titillating tinkering into a new album entitled, Hoosi, No!, a compendium of transgressive sounds evoked by the complex imagery sewn into the very tapestry of cinema history. By any objective standard, the record is a four dimensional musical monolith, eliciting the stark lasciviousness of late-night gas huffing, the blood curdling rush of Icelandic puffin throwing and the narcotizing dalliance of transcendental levitation. The sound, at once fetching and lurid, pummels the pinna and confounds the cochlea with phantasmagoric frequencies, putrid pop plops and seductive squelches – a disparate mélange with the quixotic goal of uniting musical apostates of all stripes. But, in reality, welcome to hell.

Hoosi, No! will be released on Becker’s own, What Delicate Recordings on February 24th, 2023.

1. Hoosi, No!
2. Book of Jaws
3. I Have To Leave Because There Are No Rivers Here
4. Zwunck
5. Some Small Anti-Christ At The Art Show
6. 80 All Over
7. Love Song For H.R. To Sing
8. Dye-Night Escapes
9. Queasy Bricks and Starving Cars: The Spectacular Collapse Of The Wing Street Bridge